Do they really think they’ll get away with it? Probably not, but desperate people do desperate things. After decades of being allowed to overgraze public land (i.e., your land and my land), ranchers are a little upset about finally receiving the occasional bit of negative publicity. Fortunately for them, they have their cattle prods firmly affixed to (or maybe inserted in) members of the Wyoming state legislature and Governor Matt Mead. These upstanding public officials recently did their masters’ bidding (zap! yessir!) by enacting this gem of a law. Of course, gag rules of this kind are unconstitutional (not to mention really, really stupid), and this one won’t do any harm in the long run—except to the reputation of the state of Wyoming. As if that needed any further sullying. . . . 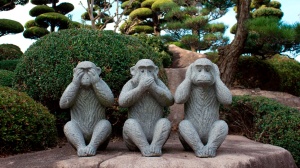 Still, this tactic is being applied elsewhere, too. The specifics vary—sometimes it’s to silence citizens concerned about global warming, sometimes it’s to stifle critics of agribusiness—but in the end it all comes down to one thing: keeping a lid on the truth. As for Wyoming, are there any more real cowboys out there? If so, how about rounding up these jokers and sending them down to defeat in the next election. On the long ride back, boys, make sure you take a supply of water purification tablets if you plan on drinking from any of those beautiful Wyoming streams. Even cowboys are susceptible to E. coli. So are the governor and the legislators, but don’t worry: they can afford all the bottled water they could ever need.
Home | Aberrant Politics
Monkey graphic from Japanexperterna and used under Creative Commons license.